Editor’s Note: Grace Cathedral’s Archivist, Michael Lampen, is the son of a Grace Cathedral canon and the grandson of an English cathedral dean. He has served as cathedral archivist since 1980 and is the authority on the history, architecture, stained glass and sacred furnishings of Grace Cathedral. We are sharing this delightful article,  originally posted on the Golden Gate Audubon Society website, in honor of National Bird Day, which occurred earlier this week on January 5.

Hiding in plain sight on the choir-stall seat cushions of San Francisco’s Grace Cathedral is a cornucopia of Northern California fauna. Some seventy seat cushions display needlepoint images of 34 mammal species, 16 fish species, 37 insects and invertebrates, and 94 bird species. Another 18 bird species are in the wall stalls. Associated plant species and natural settings are also included. Designed by artist Eula Getty Capron (“Eugenia”) of Sausalito, the series was crafted by 122 faithful Episcopalian stitchers from many diocesan parishes. Installation in 2000 honored the 150th  anniversary of the Episcopal Church in California, and the beloved saint and lover of nature for whom San Francisco was named. 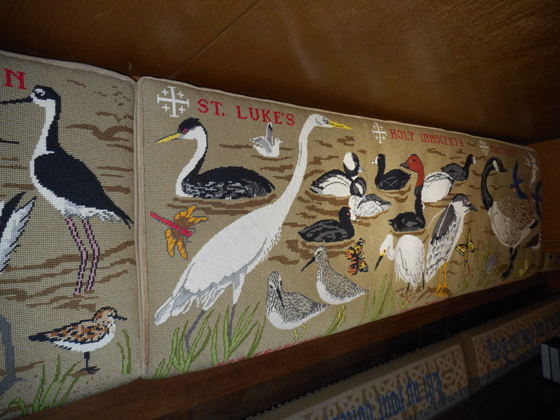 Sets of stall cushions focus on specific bioregions; the Coast Ranges/Point Reyes, San Francisco Bay, the Farallon Islands, the Sierra Nevada, Monterey Bay and the Deep Sea/Pacific Ocean. The Monterey Bay set is devoted almost entirely to sea otters. Clergy stalls also have California fauna relating to clerical roles such as the golden eagle for the cathedral or bishop’s stall. Individual wall stalls include several additional mammals and birds. In the Franciscan spirit, all stall kneeler cushions display in needlepoint the full text of Hymn 400, “All Creatures of Our God and King.” 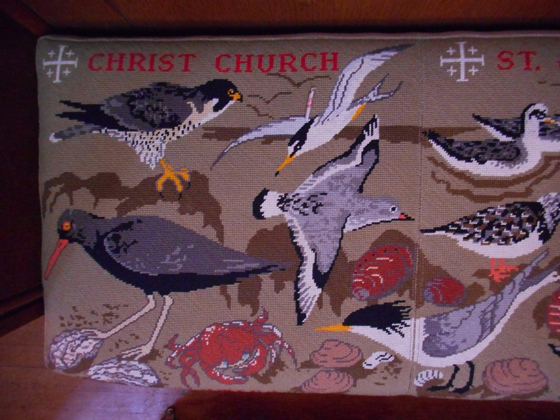 Some of my favorite needlepoint renderings show birds in motion such as the flock of sandhill cranes, the dancing” egrets, and the mountain quail covey running from unseen danger past a startled marmot. Other personal favorites are the black oystercatcher, scoter duck, and colorful puffins. As a cathedral choir alumnus I also have a soft spot for the “chorister” cushion. A wall stall cushion close to the organ console, it shows 12 songbirds and honors the choristers whose voices fill the cathedral with song at Sunday services and weekly evensong. As singing goes, perhaps the most deserving bird depicted in the cushion is the western meadowlark, and the least deserving the western bluebird. Choristers, like birds, also cover a range of vocal ability. I was, I suppose, a Wilson’s Warbler at best. (A full list of species and their choir-stall locations can be found here.) 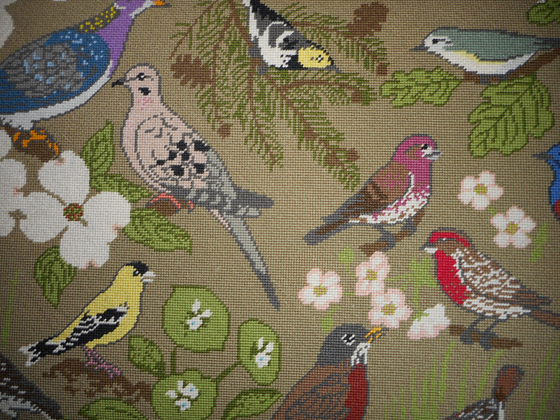 Needlepoint in cathedrals has roots in 19th century England, and its introduction at Washington National Cathedral in 1954 popularized it in Episcopal churches including Grace Cathedral. Wool is woven onto a stiffened open canvas (basketweave stitch) on which the design is painted. A sanctuary kneeler cushion series devoted to California windflowers and designed by Mona Spoor, was created in 1964 for the cathedral’s consecration. It is still in use. Later needlepoint projects also adorn the cathedral apse, side chapels and south transept. 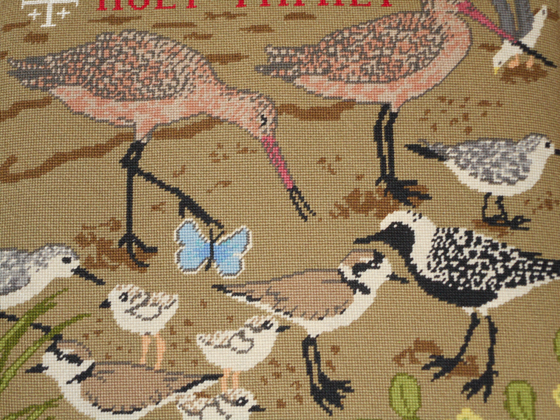 Eula Getty Capron drew her bird inspirations from both on-site sketches and faunal guides including the standard “bird books.” She placed the birds in natural poses and activities, often capturing a characteristic pose or flight pattern. Some winter and female plumage adds variety and complexity. The availability of English Appleton wool in 134 colors, supplied by Needlepoint Inc. of San Francisco, enhanced accuracy in the designs. As a result, most plumage, eye and leg colors are accurate. Here and there a plumage bar may be missing or a stitcher ran out of the right colored wool, but these errors are rare, and a challenge for the knowledgeable viewer. A focus on variety has juxtaposed many birds, especially shore and wetlands species, in unlikely and sometimes extreme proximity, but the crowding only serves to emphasize the amazing variety of bird species with which California is blessed. 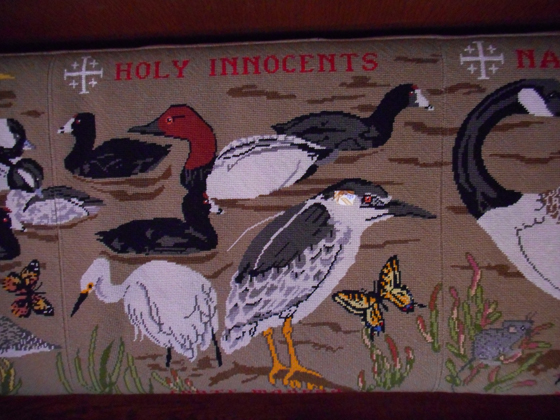 More birds appear in cathedral stained glass, sculpture, murals, etc. The old cathedral lectern (1907) has an eagle bookrest, as the eagle was supposedly the highest-flying bird, a symbol of inspiration. Gutzon Borglum, of Mt. Rushmore fame, carved the piece. An ancient Coptic stele set over the south crypt entrance shows quail (Coturnix coturnix) eating from a cross-shaped vine, symbolic of the faithful taking Holy Communion. The 6th century stele was from a church built in the ruins of the Temple of Luxor, Egypt. Birds representing Brother Wind fly in the top of the Canticle of the Sun rose window, devoted to St. Francis and his famous poem (Loire, 1964).

Of course, bird populations of Northern California have changed over the past 150 years, and change continues. This is especially true in highly urbanized areas like San Francisco. However, some birds still visit the cathedral grounds, called the cathedral close. The reliable native white-crowned sparrow still sings his territorial song here in early spring and was even heard here between storms in late January this year. Mourning doves once nested yearly in a now-gone Monterey pine near the Cathedral School. This writer was once dive-bombed by an angry red-hawk that was trying to establish a nest on the top of the cathedral’s south tower. A few years later I watched crows stealing eggs from Brewer’s blackbirds nesting over the tower’s front doorway. Other occasional visitors to the close include Anna’s hummingbirds, American robins, house finches, bushtits, crows and gulls. “English sparrows” are non-native regulars and red-masked conures often fly over in noisy flocks. Grace Cathedral even experienced an owl “invasion” in October 1931 when owls, fleeing northern forest fires, gathered in the unfinished cathedral attics. 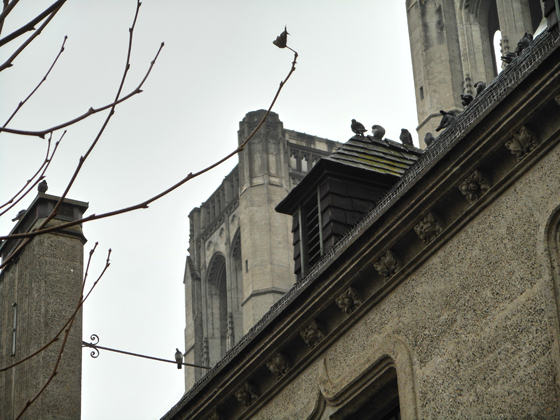 Domestic pigeons are long-established non-native residents of San Francisco and Grace Cathedral. They have raised many young on the remote high cathedral parapets, all now netted off or spike-stripped. What is now the Chapel of Saint Francis, the cathedral columbarium, was an open-arched pigeon haven when the north tower stood alone (1940-1961). Even the cathedral bells ringing in the chamber above did not deter their nesting in the tower’s cavernous central room. Ironically, the word “columbarium,” now used to refer to a repository for the ashes of the dead, actually means “dove-cote”. Today pigeons still forage across the close in search of food and often roost on the eaves of Diocesan House, overlooking Huntington Park. On cold afternoons they sometimes sit in a flock on the outdoor labyrinth to absorb latent heat for the granite paving. Now and then, a pigeon may wander into the Cathedral and vergers are put to work getting the visitor back outside, usually from the upper vaults, and gently. After all, Grace Cathedral’s symbol is the descending Dove of the Holy Spirit.

While much of the needlepoint is visible from the presbytery “crosswalk” accessible to visitors, full access can be made by contacting the cathedral verger Charles Shipley at charless@gracecathedral.org, phone 415-749-6316. Photography is allowed

Congregation Update: I Will Sing A New Song